This is the final post for “76 Years Later: Argylls Remember Our Fallen.” Last year, as in Black yesterdays: the Argylls’ war (1996), I closed with Cpl Harry Ruch’s words about the seeming futility of trying to write about battle. Harry disparaged what he deemed the utter failings of his own scribbled diary to convey life – and death – in battle. Yet, despite Harry’s powerful warning, Black yesterdays tried to do just that. I believed then, and I retain that conviction now, that Harry should be given the last word – in 1996, last year, and this year.

I thanked many folks at the start of this year’s project, and I wish to name a few again. Col Alan Earp, OC (and, once upon a time, young Lt Earp of the Pioneers) inspires me in this task. His continuing reflections on the Argylls in battle, in life, and in death are always perceptive and provoke further consideration on my part. His son, Jonathan Earp, is a keen supporter of the project, particularly as it relates to the battle of Veen (7 March 1945), and he has been unfailingly helpful and supportive. Col Glenn Gibson, LCol Glenn De Caire, and the Argyll Regimental Foundation (ARF) back the project in many ways, all appreciated. Good friends such as Col Rick Kennedy and LCol Tom Compton have been there from the beginning, as are the old LBs and newer old friends such as Col Geordie Elms. Julia Armstrong is the ARF’s website quartermaster. Julia has a flair for design that is obvious in the quality of the postings. More than that, she is steadfast in her support and tolerant of the last-minute, late-night offerings to her as, invariably, I fall behind about the third week into the month. We could not do it without you, Julia, tapadh leat.

Lorraine DeGroote deserves special thanks for her forbearance and her spirited backing of the project. I thank you, my darling.

Without BGen Doug Fearman and Pte Mac MacKenzie, the Black yesterdays project would not have been possible. I remain grateful to both.

I have known Joan Balinson of the Argyll Senate for many years. Six years ago, when we first discussed the concept for the Argyll poppy and content, Joan immediately raised the idea of accompanying text for the rank, name, dates, and unit affiliation. As is always the case with Senator Balinson, it was a good idea and I paid heed to it. We started with text of 200 characters and raised it to 2,500 without paragraphing. Joan thought we should consider images and we did with the postings in 2019. Last year, because of COVID-related closures, we decided to mount the poppy entries on the website, adding considerably to the text with a goodly number of images. This year we added more images, always with Joan in mind. She has played a pivotal role in the evolution of the idea. Thanks, Joan, as always.

Finally, I wish that Maj Flan Paterson, Maj Hugh Maclean, Capt Claude Bissell, and Capt Sam Chapman were still around to thank personally. Their ruminations on the battalion, in battle, and in death are a priceless treasure for Argylls. They embody the characteristics of the 1st Battalion as defined by Maclean – humanity, morale, compassion, and style.

“He is cut down in an instant with all his future a page now to remain forever blank.
There is an end but no conclusion.”
– Capt Sam Chapman, C and D Coys

Black Yesterdays: The Argylls’ War
On the Morrow of His Battles – An Afterword

From the time the Battalion went to France until his hospitalization on 20 Oct. 1944, Cpl. Ruch kept, as best he could, daily notes (without dates) of what had happened. When his unit was in a holding position, he tried to put them together. Then, in hospital, he attempted to establish some chronological order. Later, in England, he typed up his notes and destroyed the originals. “When I reread it,” he recalled, “it told only the bare essentials, not the human side.” And the bare essentials lacked any power to convey what battle was like. In an attempt to remedy this deficiency, Ruch penned this epilogue.

Private Diary. Epilogue. Cpl. Harry Ruch. 7 Platoon, A Coy
The foregoing is just a brief story of some of the main points of what happened and leaves many points untouched. In action situations are happening every second and every second seems an hour so only a small fraction of what happened can be catalogued. It will be noted that the term “a quiet and uneventful night” has been used quite often. This statement will prove misleading to the uninitiated as I refer to a quiet night etc. compared to the noisy ones we had been through. There was never really a quiet night at the front. One was always on the alert and expecting anything.

Another term which will prove to be misleading is when I refer to “no opposition”[.] This should not be taken literally as it does not take into account the brief skirmishes with small enemy parties, rearguards and patrols which were constantly in evidence. It was just that it was not a heavy prolonged engagement like the Seine, Caen, Falaise, the Albert, etc but they proved to be very sticky and dirty and cause us almost as many casualties as the big ones. This type of fighting happened quite often.

This does not take into account the hours we lay in trenches sometimes for days never knowing what was to happen next, the tiring drive from Caen to Antwerp when we were on the go and alert from the 8th of August until the 20 October without proper rest. It does not take into account the many wet and cold nights and days when we went without a bath or proper wash for 6 weeks, without shaving for a week or more, without sleep, food and only a quart of water for 72 hours at a time.

It does not take into account that we lived, ate and slept in trenches. That we have seen our close comrades killed and maimed for life, we have seen our comrades crack and go to pieces, have experienced the sickening smell of death and battle for days, have seen twisted and broken bodies of our own and enemy men. Bodies that lay in the open for days.

It does not take into account the bodily weariness that comes from continually being on the alert and driving hundreds of miles in pursuit of the enemy. That is something that cannot be put on paper and must be experienced by the reader before he can understand.

It may seem that we did not have some good times. To give that impression would be misleading. In action one has the very close comradeship of men who have submerged all their petty and selfish differences. They are rather out of place amongst the death and destruction of war. Here, in every day happenings men performed what would seem like heroic deeds in civilian life and which were natural and seemed insignificant. Men risked their lives to save a comrade, went out of their way to help others. We were soon able to receive enjoyment and fun out of things that would not interest the average civilian. We took our fun when we could as we never know what would happen next.

The old saying “Eat, Drink, and be Merry as to-morrow you may die” was never truer out there.

During the Second World War, the 1st Battalion, The Argyll and Sutherland Highlanders of Canada (Princess Louise’s) had 288 killed, 808 wounded, 72 prisoners, and over 200 who left the battalion as a result of sickness or accident. The total is 1,368; about 3,300 served during the war; the casualty rate is 41.45%. The battalion went into battle in July 1944 with just over 800 men; its fighting strength was about 400; it lost that strength over 3 times during the course of its 11 months in battle – black yesterdays indeed! 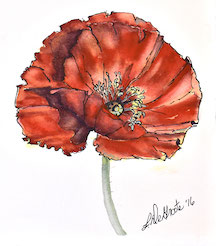 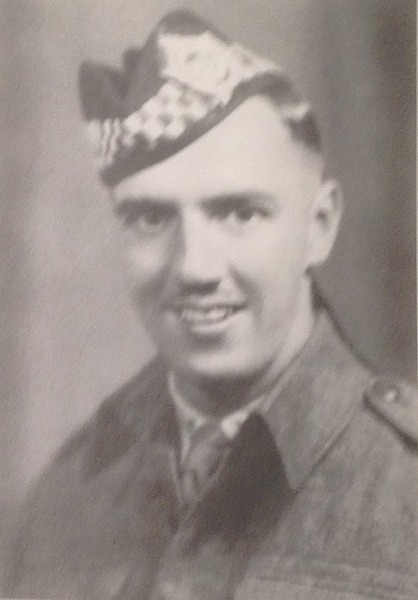 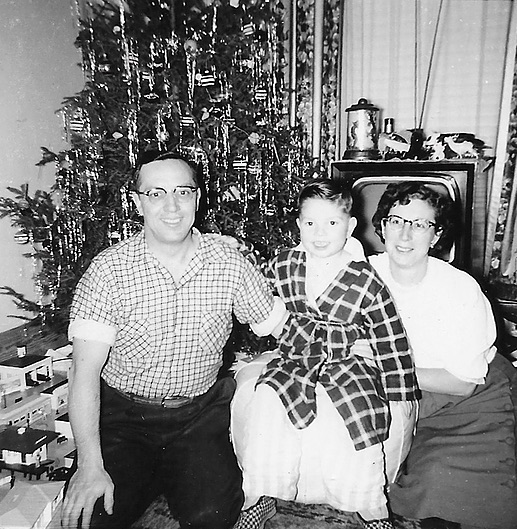 Harry and Lillian with son Bruce. 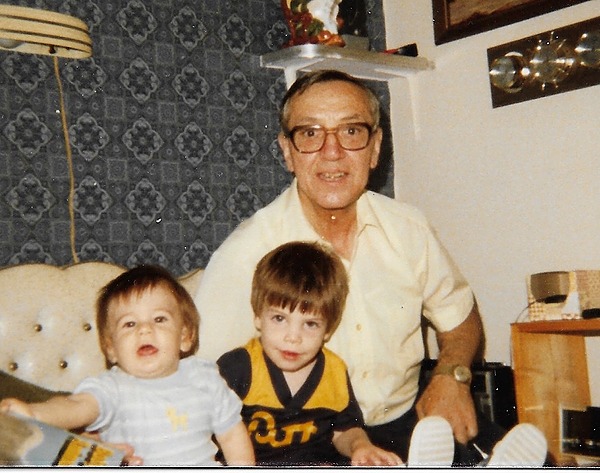 Harry with grandsons Michael and John. 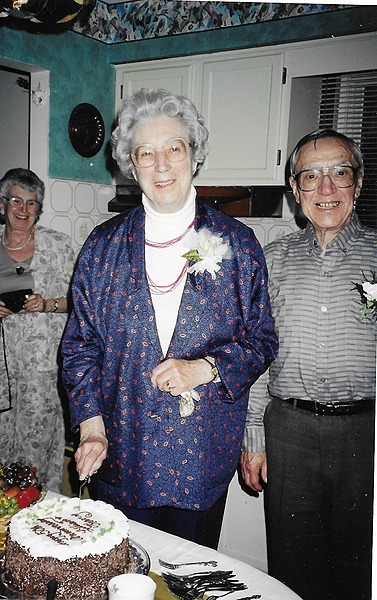 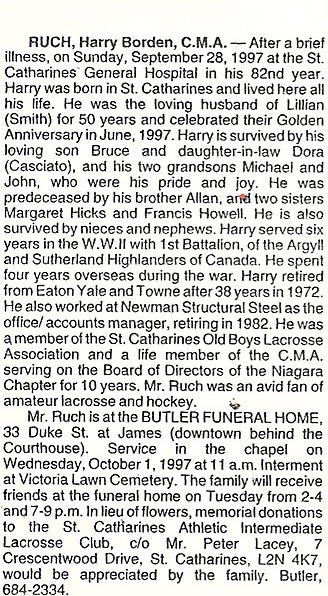